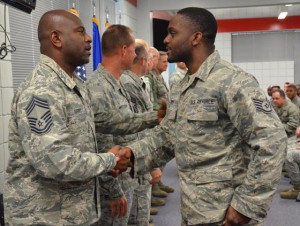 More than 90 members of the 202nd RED HORSE Squadron were recognized as “Home Heroes” during a ceremony that included present and past members of the unit.

The Hometown Heroes Salute recognition program is a sanctioned Air National Guard program that was created in 2008 to celebrate and honor the “significant contribution of its Airmen, families and communities and those special supporters to the mission of the U.S. Air Force and the Air National Guard.” The RED HORSE Airmen honored during this recent ceremony were recognized for have deployed for more than 30 consecutive days in support of Operations Enduring Freedom, Iraqi Freedom, Noble Eagle and other peacekeeping operations across the globe since Sept. 2001.

The unit last deployed in 2012 to Al Udeid Air Base, Qatar, where it served as part of the 557th Expeditionary RED HORSE Squadron in support of Operation Enduring Freedom.