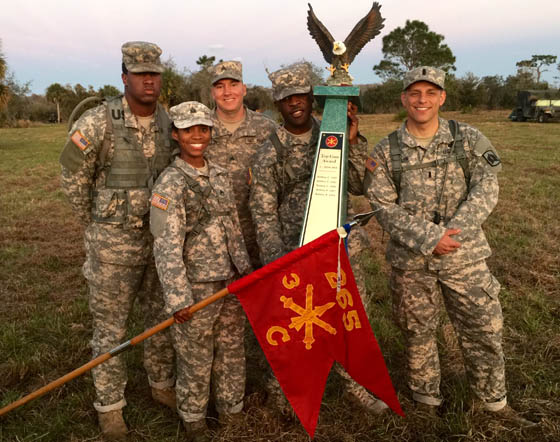 The sound of Soldiers of the 3rd Battalion, 265th Air Defense Artillery Regiment, thundered through the Aurin Grade Training Area near Arcadia as the battalion came to attention after completing its annual Top Team Competition recently. Forty-five hand-picked Soldiers organized in nine teams of five from the battalion’s units in Fort Myers, Sarasota, Bradenton and Palmetto, energetically competed for the honor and distinction of earning the coveted title “Top Team.”

Teams completed 11 separate warrior-oriented events such as: land navigation; weapons disassembly, assembly and functions check; general military knowledge; CBRNE tasks; vehicle push/pull; push up/sit up competitions; and a culminating five-mile full-ruck march. Capt. Arthur Gaines, the officer in charge of the event, summarized it best: “Soldiers had a great time, with the weather cooperating, being able to integrate knowledge of military techniques with physically exhausting events that thoroughly tested their abilities. At the end of the day, Soldiers had a tremendous sense of accomplishment.”

The competition took over eight long hours to complete with the final event being a five-mile march with 45-pound rucksacks through the training area in the afternoon sun.   Throughout the competition, Lightning Battalion Soldiers pushed each other to compete and finish well at each event.  When the dust settled, two teams had closely finished, however, at the end of the day there is only one Lightning Battalion Top Team.   For 2015, that honor goes to A team from C Battery (Palmetto), led by 1st Lt. Daniel Allen, with team mates Staff Sgt. Osby, Staff Sgt. Florexil, Sgt. Hamilton, and Sgt. Akins. Sergeant 1st Class Jon Croteau, the lead non-commissioned officer, summed up the event: “All of the Soldiers that participated in the Top Team Competition really stepped up to the challenge. Every one of the events required either a physical or mental degree of mastery. The Top Team Competition built esprit de corps in their units as well as within the Battalion – a great event that combined Army training and team building in one.”

After celebrating the day’s accomplishments with a trophy presentation and congratulatory speech by the battalion commander Lt. Col. Jeff Strickle, Soldiers were able to complete their field training exercise and return to home station. The battalion will continue this event annually, along with selecting different Army warrior tasks and drills to maintain their Soldiers at the highest level of readiness.