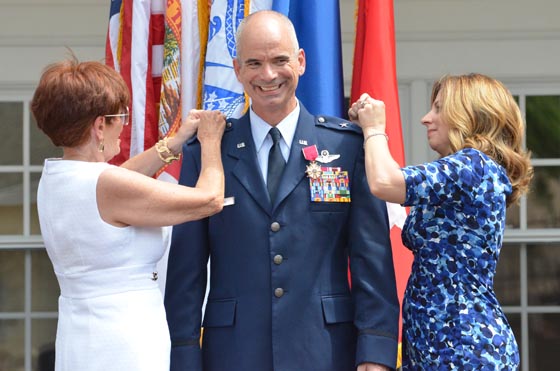 ST. AUGUSTINE, Fla. (May 8, 2015) – The Florida Air National Guard’s Chief of Staff officially pinned on his silver stars today to become the newest general officer in the Florida National Guard.

Col. Thomas Cucchi was pinned with the rank of brigadier general this afternoon during a military promotion ceremony at the historic St. Francis Barracks in downtown St. Augustine. 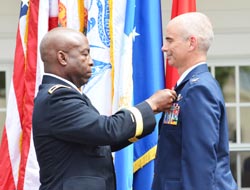 As the Chief of Staff, Cucchi is responsible to the Assistant Adjutant General – Air for mission readiness, operations, and coordination of eleven Florida Air National Guard units. This includes 2,000 personnel at seven geographically separated sites, with nearly $140 million in operating budgets.

During the ceremony Adjutant General of Florida Maj. Gen. Michael Calhoun awarded Cucchi the Legion of Merit and administered the Oath of Office before an audience of friends, family and military members.

“He is the right officer for this job, and I am honored to be a part of this ceremony today that will officially promote him to this position,” Calhoun said.

“I can tell you that I am standing here today and continue to serve because of you,” the newly promoted Cucchi told the audience, before thanking individuals for their support. “Each one of you, whether in the military, a member of my family or a good friend, have shaped my behavior and influenced me in some form or other to continue to serve.” 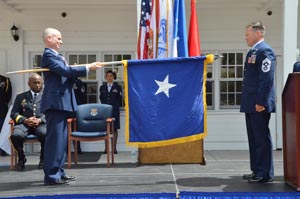 Cucchi received his commission through the Air Force Reserve Officer Training Corps in May 1985, after graduating from Worcester Polytechnic Institute with a Bachelor of Science in Electrical Engineering. In 1987 he received a Master of Science from the same institution.

His first assignment was serving as a project officer for an Airborne Launch Command and Control System, Ballistic Missile Officer at Norton Air Force Base, Calif. He attended undergraduate pilot training at Vance Air Force Base in Oklahoma, and received his pilot’s wings in June 1989 as a distinguished graduate.

Cucchi’s first operational fighter tour was at Bitburg Air Base in Germany, where he served as an instructor pilot and flight examiner in the F-15 Eagle jet. He participated in many military operations including Operations Desert Storm and Provide Comfort. Later he served with the 95th Fighter Squadron at Tyndall Air Force Base, Fla., as an instructor pilot and flight commander.

He joined the Florida Air National Guard’s 125th Fighter Wing in 1997, and in 2009 he transferred to the 601st Air and Space Operations Center at Tyndall Air Force Base.

Before wrapping up his speech, the general recognized his fellow Airmen at the Florida Air National Guard Headquarters, where he currently serves.

“From integrating air and ground forces for a common purpose to providing support to the Wing and the (Air Operations Group), headquarters is comprised of very talented individuals that pull together as a team to face many challenges. I am proud to be joining all of you on that team.

“I have only given you a small sliver of the total number of folks that have made a positive, significant impact to me and my family,” he added. “All of you are the reason I proudly put on the uniform and serve. As Albert Einstein once said ‘Only a life lived in the service of others is worth living.’ Exactly my sentiments.”

In his civilian career, Brig. Gen. Cucchi is a commercial pilot with United Airlines.