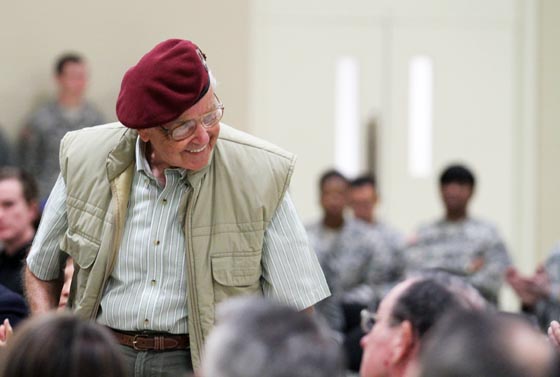 Rupert Metzrogh, a German POW held at Camp Blanding Joint Training Center towards the end of World War II attended the 75th anniversary ceremony on Jan. 10, 2015, to pay homage to what he calls his “alma mater.” Photo by Sgt. Lindsey Morgan.

“It is more than just 73,000 acres of land,” said Maj. Gen. Emmett R. Titshaw Jr., the Adjutant General of Florida. “Our heritage is deeply entwined into this post. It is where our Soldiers are trained to go fight and win our nation’s wars…It is a jewel in the crown to the state.”

Titshaw and post commander Col. Dwayne Jarriel unveiled an artistic rendering of a monument in honor of Lt. Gen. Albert Hazen Blanding, from whom Camp Blanding received its name. Later this year the monument will be erected next to the museum on post. 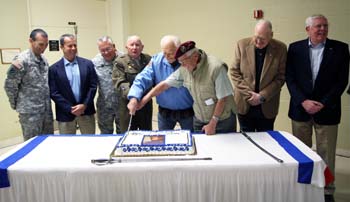 During the ceremony, the rich history of the post was explained in great detail. Camp Blanding was originally born out of the relocation of Camp Foster where present Naval Air Station Jacksonville is located. The federal government needed a location to train Florida National Guard divisions for World War II and that spot was Camp Blanding. Nearly 7,000 carpenters were brought in for the initial construction, which needed to be completed within three months.

More than 800,000 Soldiers were trained there during World War II. Camp Blanding also had a Prisoner of War Camp responsible for over 4,000 Prisoners of War that operated from September 1942 to April 1946.

“At the Camp, I was able to mature, and gradually the propaganda the Hitler regime had planted in my mind lost its influence and I began to think for myself,” Metzrogh said. “I was grateful in hindsight and considered the experience as my graduation from ignorance.”

At the conclusion of the event, previous post commanders joined veterans of World War II and Metzrogh for a ceremonial cake cutting.