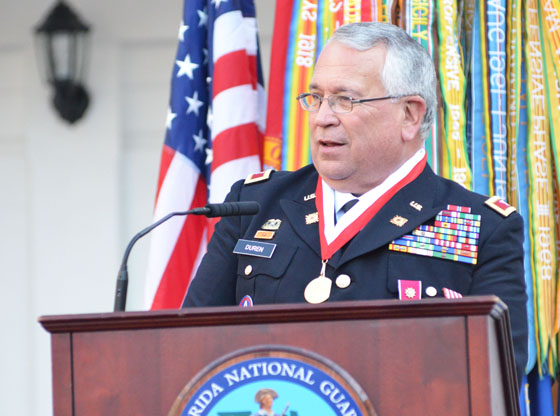 ST. AUGUSTINE, Fla. (Feb. 20, 2015) – Friends, retired military members, and Guardsmen gathered at the St. Francis Barracks this afternoon to honor a long-serving and influential Florida National Guard Soldier as he prepares for retirement from the Army.

Col. Joseph “Mickey” Duren was honored during a command retreat on Patriot Field and a retirement ceremony at the Florida National Guard headquarters in downtown St. Augustine.

Duren, who began his military career as an enlisted Soldier with the Florida Army National Guard in 1975, has served 40 years in various capacities with the state and nation. In September 2014 he retired as the State Quartermaster after 30 years as a State of Florida employee. As a drill-status Guardsmen, he most recently served in the J5, Joint Force Headquarters, in St. Augustine. 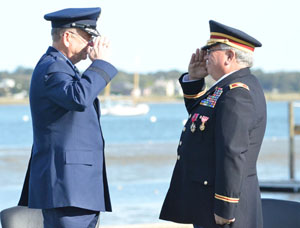 During the ceremony Adjutant General of Florida Maj. Gen. Emmett Titshaw presented Duren with the Legion of Merit and the Florida Cross.

“Thank you Mickey for your service,” the general said during the retirement ceremony following the command retreat. “…Mickey has always been the ‘go-to’ guy in this organization.”

Titshaw assured the attendees that Duren’s years of service will be appreciated and remembered well into the future generations of Florida National Guard Soldiers and Airmen.

“What defines me is my family,” Duren said to the audience of mostly Florida National Guard members. “And you guys are part of my family now.”

Duren enlisted in the 853rd Supply and Service Company as a private in March 1975, attaining the rank of staff sergeant before attending the U.S. Army Officer Candidate School at Fort Benning, Ga. He was commissioned as a second lieutenant in 1982, and after serving as a platoon leader became the Operations and Training Officer for STARC (-) from 1984-1987. He later served as the aide-de-camp to the late Adjutant General of Florida Maj. Gen. Robert Ensslin Jr.

In 1989 Duren took command of the unit in which he began his military career – the 853rd Supply and Service Company – and worked his way up to commander of the 927th Corps Support Battalion in June 2000. In 2002 he joined the Headquarters, 50th Regional Support Group as deputy commander, and after serving with the 32nd Army Air Missile Defense Command in Orlando from October 2003 to July 2004, was selected as the commander of the 50th Area Support Group. As commander he deployed with the unit to Kuwait in support of Operation Iraqi Freedom from July to November 2004.

From Nov. 2007 until February 2011, Duren served as the post commander of Camp Blanding Joint Training Center in Starke, Fla. In March 2011 he moved to the Joint Force Headquarters in St. Augustine to serve in J4, G1, and ultimately, J5.

Duren is a native of Jacksonville, Fla., and currently is vice president of Product Development and Logistics for Island Doctors in St. Augustine, Fla.