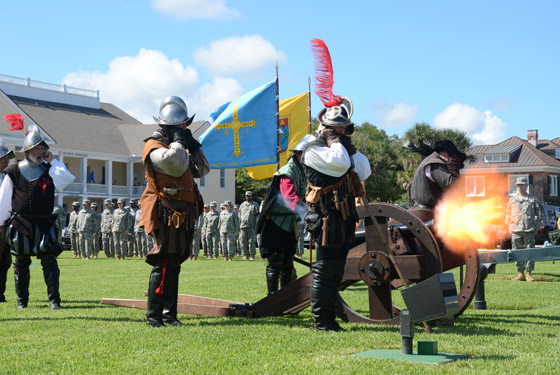 Although Sept. 16 is officially Florida’s anniversary of the 449th “First Muster” of citizen-Soldiers in the continental United States, the Florida National Guard and Department of Military Affairs commemorated the event Friday, Sept. 12 with a command retreat and traditional Spanish firing detail by historical re-enactors from Florida Living History. 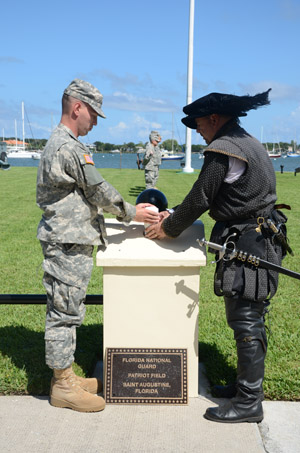 The Florida Army National Guards Staff Sgt. Jared Papesh and a re-enactor from Florida Living History place a cannister of soil representing a historic battlefield along the side of the newly dedicated “Patriot Field” during the 449th First Muster ceremony at the St. Francis Barracks, St. Augustine, Fla., Sept. 12, 2014. Photo by Staff Sgt. Jeremy Brownfield

“As the first National Guard in the United States, with roots dating back to 1565, we take immense pride in all that has been sacrificed and accomplished by all our men and women in uniform over the past four-and-a-half centuries,” Florida National Guard historian Alison Simpson said during the ceremony.

According to historians, the “first muster” took place on Sept. 16, 1565, when Pedro Menendez de Aviles gathered around him the soldiers of his small Spanish army, as well as the civilian settlers who accompanied him to the newly established presidio town of St. Augustine. He was about to march north to the French settlement of Fort Caroline near the mount of the St. Johns River. Because his plan called for the use of the majority of his regular soldiers, Menendez drew upon Spanish laws governing the milicia, or militia, in an imperial province. As both the civil governor and the commander-in-chief of the military establishment, he had the authority to call all free male settlers in the presidio province to active service.