Soldiers from the 1st Battalion, 244th Aviation Regiment, are flying three UH-60 Black Hawk helicopters to support the Florida Division of Forestry in suppressing wildfires in the Palm Coast and Espanola areas of Flagler County. The Black Hawk crews, stationed at the Flagler County Airport, are helping the wildfire control efforts by dropping water on wildfire lines using 780-gallon collapsible water buckets attached to the helicopters.

According to the Division of Forestry, ongoing drought conditions have fueled wildfires across the state and more than 3,500 wildfires have been reported in Florida since January. Those fires have burned more than 240,000 acres, and current forecasts expect dry conditions to continue in the near future.

According to Florida Guardsman Maj. Randy McCreary, the mission felt like déjà-vu for some of 16 aviators and crew supporting the wildfire suppression efforts.
“We’ve actually performed this same mission in this same airport in 2007,” McCreary said. “It’s pretty much the same, just another go-around.”

On June 15, the National Guard Black Hawks dropped nearly 32,000 gallons of water on areas of the Espanola Wildfire, and on June 16 the helicopters dropped an additional 35,000 gallons in the area when the fire jumped containment lines.

Duty, who is working with the Guard Soldiers at the airport, explained that nearby water supplies in retention ponds and lakes have limited the time it takes for the helicopters to pick up more water and return to the fire. He estimated the Black Hawks were dropping water on the fires about every four minutes during a mission.
“We’re doing initial attack on new fires, as well as supporting ground troops on the existing fires,” Duty said. “We’ll get a call from one of the operations’ section chiefs or a fire department, and we’ll immediately launch two or three Black Hawks and they start dropping water on the fire.”

Speaking to the pilots and crewmembers on June 16, Forest Ranger Pete Donahue assured the Soldiers their assistance was critical to the Division of Forestry’s efforts to contain the blazes: “You made a real difference out there. It may not feel like it, but you did…Everyone is a little bit more comforted when you are there.”
According to Duty, the majority of the currently active wildfires in the area have been attributed to lightning strikes.
### 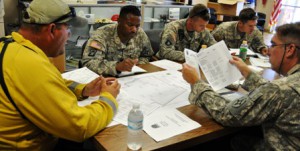 Pete Donahue of the Florida Division of Forestry (left) discusses wildfire suppression missions with Florida National Guard's Maj. Randy McCreary (second from left) and other members of the 1st Battalion, 244th Aviation Regiment, at the Flagler County Airport in northeast Florida, June 16, 2011. The Soldiers and their UH-60 Black Hawk helicopters were on duty to drop water on spreading wildfires near the city of Palm Coast, Fla. Photo by Master Sgt. Thomas Kielbasa 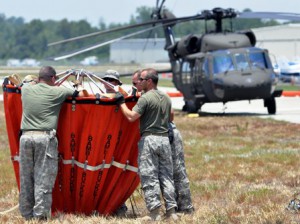 UH-60 Black Hawk crewmembers from the Florida Army National Guard's 1st Battalion, 244th Aviation Regiment, prepare a collapsible water bucket to support wildfire suppression missions in northeast Florida, June 16, 2011. Each bucket can hold 780 gallons of water and be carried under the Army helicopters. The aviators were helping the Florida Division of Forestry and firefighters by dropping water on spreading wildfires sparked by lightning. Photo by Master Sgt. Thomas Kielbasa