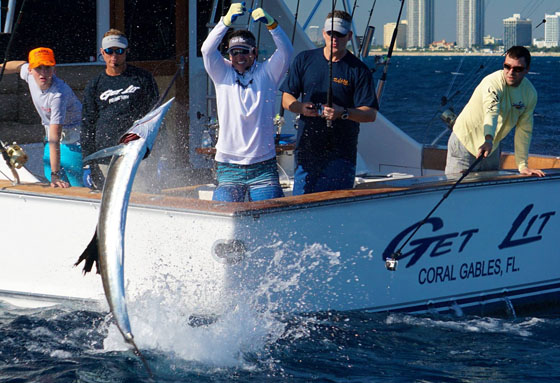 Florida Army National Guard’s Maj. Peter Jennison and his son Morgan bring in a sailfish off the coast of Miami Beach, Fla., during a taping of the “Bass 2 Billfish” sport fishing show in late January. The Jennisons, along with host Peter Miller and the Get Lit Fishing Team, brought in seven sailfish during the saltwater fishing excursion. Photo by Mike Fineguerra

ST. AUGUSTINE, Fla. (Feb. 20, 2015) – A National Guard Soldier will be featured on a nationally televised sport-fishing show this month, representing citizen-Soldiers everywhere as he reels in bass, sailfish and even an alligator.

Maj. Peter Jennison of the Florida Army National Guard’s Recruiting and Retention Battalion, along with his son Morgan, will appear on a pre-taped episode of NBC Sports’ show “Bass 2 Billfish with Peter Miller” on Feb. 25 and March 4.

The reality fishing show with professional angler Peter Miller is filmed in locations across Florida. Jennison’s two-day episode shot in late January included salt-water fishing for sailfish off of the coast of Miami Beach, and freshwater bass fishing deep in the Florida everglades.

“It was surreal to be surrounded by such skilled fishermen,” Jennison, a 20-year-veteran of the Florida National Guard, explained. “Peter Miller and his entire crew were incredible professionals. They treated us like absolute royalty every step of the way. Not only did we learn some highly technical fishing skills (kite fishing), we had a ton of fun doing it.”

Jennison said he and his son caught seven sailfish during the salt-water portion of the episode – which broke the show’s previous one-day record of five sailfish caught – and they also reeled in two sharks. The crew released the sailfish and the sharks, but kept three mahi fish for dinner that night.

On the second day they caught more than 50 fish in the expansive everglades, including bass, brim, oscar, mudfish, crappie, and gar.

“We even caught one alligator that ate some of the bass we were reeling in,” Jennison said. “But the alligator wasn’t harmed.”

“Bass 2 Billfish” host and producer Peter Miller explained that the excursion with Jennison and his son was the first time in the show’s six seasons that the guests and crew have “hooked and caught a triple header” of sailfish. He also noted that fishing with the Guardsman was an “honor.”

“Watching (Jennison) and his son smiling from ear to ear while battling 8-foot-long sailfish all day – the fastest fish in the ocean, clocked at 72 miles per hour – was amazing,” Miller said. “They both share the same passion for the outdoors and this trip gave them the perfect platform to further strengthen their father-son bond. It choked me up to see them hugging throughout the day, celebrating after each fish…”

Miller and his crew are the three-time World Sailfish Champions and are considered one of the top sailfish teams in South Florida.

“As I watched them laughing and taking some ‘selfies,’ I couldn’t help but think of how fortunate we are, to be afforded our freedoms because of the selfless acts of our Army National Guardsmen,” Miller said. “Taking them fishing was my little way of saying ‘thank you’ and I look forward to doing it again soon.”

Jennison added that the trip was more than just a once-in-a-lifetime opportunity to spend two days in balmy Florida weather with a legendary crew of sport fishermen; he said he also used it as a chance to promote the National Guard as a whole

“After over 20 years of service in the Florida Army National Guard, and nearly three years deployed, it was an extreme honor and privilege for me to spend those few days fishing with my son Morgan,” Jennison explained. “But the opportunity to share with the world a little about the incredible career I’ve had in the National Guard was equally rewarding. It’s my hope that somebody will watch ‘Bass 2 Billfish’ and be inspired to join the Florida National Guard like I did.”

The first part of this “Bass 2 Billfish” episode will air on NBC Sports Outdoors on Feb. 25 at 2:30 p.m. EST, with a replay on Feb. 26 at noon. The second part of the episode will be shown March 4, 2:30 p.m. EST. Encore presentations of both episodes will air at later dates on NBCSN.  More info on the show can be found on www.Bass2billfish.com or its official YouTube channel at www.youtube.com/Bass2Billfish.