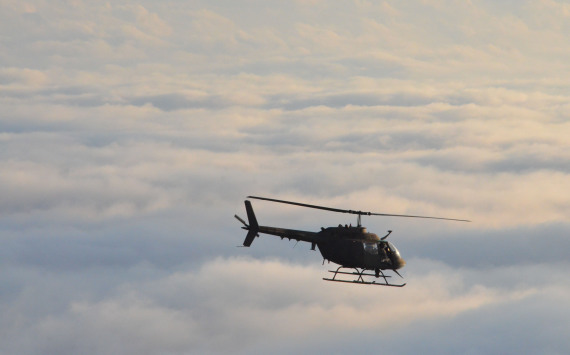 More than 100 Soldiers, past and present pilots, maintainers, and family members gathered at the Army Aviation Support Facility No. 1 at Cecil Commerce Center to pay tribute to the helicopter as it was divested from the Army National Guard.

The Kiowa was a “trusted, reliable piece of equipment that has allowed us to do our military mission for many years,” State Aviation Officer Col. James Lord said during the ceremony.

“We are closing the history books on a very proud chapter of our history,” he added.

Prior to the ceremony two LUH-72 Lakota helicopters escorted the Kiowa on a final flight over Northeast Florida to St. Augustine. The helicopters circled the historic Castillo de San Marcos – near the site of the original 1565 “first muster” of Spanish militia – and returned to Cecil Commerce Center.

Senior Field Engineer from Bell Helicopter company Tony Karpinski attended the ceremony and noted that the Kiowa airframe had a long and trusted record of service. He said at one time the Kiowa was heavily utilized by National Guard units around the U.S.

“They have been around a long time and flown thousands and thousands of hours,” Karpinski said. “We’re very proud of the aircraft.”

Three of the remaining Florida National Guard Kiowas based in Jacksonville are being transferred to different Florida sheriffs’ offices to augment their aviation programs, and a fourth will be placed on static display outside the Army Aviation facility at Cecil Commerce Center.