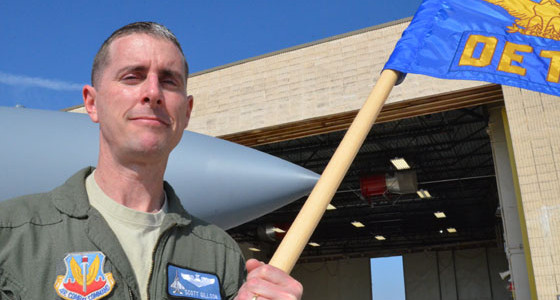 Lt. Col. Scott Gilloon, an F-15 Eagle pilot with more than 2,000 flight hours, assumed command of the 125th Fighter Wing’s Detachment 1 during a morning ceremony at the Homestead Air Reserve Base near Miami. 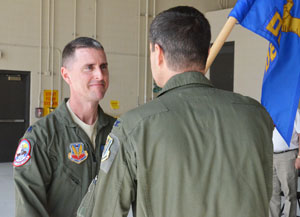 With its stable of F-15 jets, Detachment 1’s no-notice alert mission is to provide North American Aerospace Defense Command (NORAD) with around-the-clock rapid response to any threats within U.S sovereign airspace. These pilots and Airmen could be the last line of defense against an attack anywhere from South Carolina to Alabama.

Standing in front of an F-15 fighter jet and addressing an audience of senior Florida Air National Guard leaders and Detachment 1 Airmen, Gilloon said he understands how critical the alert mission is to safety and security in and around Florida.

“This is a vital piece of the overall defense of the United States,” Gilloon said. “We ensure that no matter what threat is presented, we are here and ready, 24-7, in this facility to address that threat.”

The alert mission there began in the early 1960s after the Cuban Missile Crisis, and has been operating continuously ever since. In 1983, the 125th Fighter Wing took over the alert mission in South Florida.

Gilloon began his military career in 1998 with the 68th Fighter Squadron at Moody Air Force Base, Ga., and after several assignments joined the Florida Air National Guard in September 2008. He most recently served as the Chief of Combat Air Forces Requirements Branch at the National Guard Bureau in Washington, D.C. He follows Lt. Col. Adam Langton into the Det. 1 commander’s position.

Gilloon noted that the new assignment will give him an opportunity to put his insights gained at the national level to work “in the field.”

Commander of the 125th Fighter Wing Col. Brian Simpler welcomed Gilloon back to the Florida Air National Guard, and lauded him for his work at the National Guard Bureau.

“For the F-15 he did an absolutely incredible job working with our stakeholders for our weapons systems…to keep the (Air National Guard) modernized and ready to fight,” Simpler said. “His vision and dedication have ensured this generation of fighter pilots will (have) a distinct advantage over whoever decides to fly against them.”

Simpler stressed that Gilloon’s experience and professionalism will be vital to the continued success of the alert mission.

“Our Airmen know that serving as part of the alert team is not a normal job,” Simpler added. “This is the only place in the Florida National Guard that our warriors are on call, all the time, every day of the year, with live loaded jets and a direct line to NORAD and the (president). When you report for duty you never know whether it will be a normal day or when you will be stretched to your very limits of endurance and capability.

“This is a place where the margin for error is extremely small,” Simpler said.