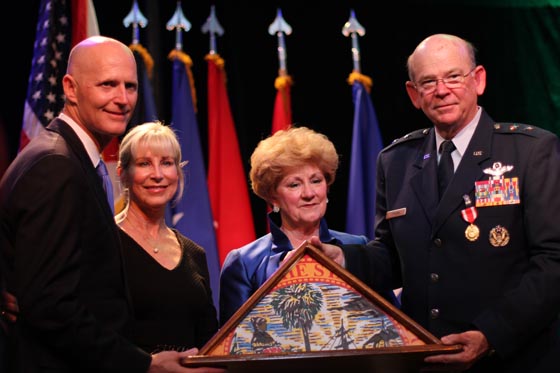 ST. AUGUSTINE, Fla. (March 28, 2015) – Hundreds of military leaders and dignitaries gathered at the World Golf Village on Saturday evening to pay tribute to the Guardsman and Airman who has led the Florida National Guard over the past five years.

The evening marked the end of Titshaw’s last full day as Florida’s Adjutant General, as he prepared to pass the reins to incoming Adjutant General of Florida Maj. Gen. Michael Calhoun on Sunday morning during an official change of command.

During the evening ceremony Gov. Scott presented Titshaw with the Florida Cross for serving as the governor’s senior military advisor during his period as the adjutant general. 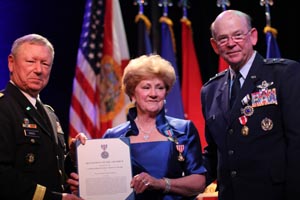 Calling Titshaw a “proven leader,” the Governor said “During the last four years as the Adjutant General of Florida I have been honored to directly work with him to keep our families safe and support the great men and women of Florida.”

The citation for the award listed Titshaw’s numerous accomplishments as the adjutant general, including: leading the governor’s base commander meetings; helping establish relationships to spearhead legislative actions to support Florida Guardsmen and their families; and initiating programs to cut unemployment rates among drill-status Guardsmen.

Next the National Guard Bureau Chief Gen. Grass presented Titshaw with the Air Force Distinguished Service Medal. The award for Maj. Gen. Titshaw cited that he is “a highly respected leader whose input was frequently requested on strategic discussions across a wide range of mission areas. He was at the forefront of many national defense issues impacting the National Guard, to include testifying before the National Commission on the Structure of the Air Force.”

The award citation further noted that Titshaw authored a “visionary document provided to the Council of Governors highlighting seven principles for their consideration when reviewing legislation and polices that affect the missions of the National Guard.”

Grass highlighted portions of Titshaw’s career, including his time as a fighter pilot and his support to numerous domestic response missions. He also lauded Titshaw’s leadership while preparing Florida Guardsmen to deploy overseas for federal missions.

“It didn’t make any difference whether they were Air National Guard or Army National Guard of the great state of Florida, they were going to be ready,” Grass added. “And he was going to fight all the way to the top to get them the resources to make sure they were taken care of.”

Grass also presented the Air Force Scroll Award to Mrs. Titshaw for the “significant and positive impact” she made on her husband’s Air Force career, and for her contributions to the “well-being of military members and families of all services and components.”

Titshaw enlisted in the Florida Air National Guard in May 1970 and received a direct commission the same year. In 1972, he completed Undergraduate Pilot Training at Columbus Air Force Base, Miss., receiving the Distinguished Graduate Award. After earning his wings, he was assigned as a Squadron fighter pilot with the 159th Fighter Interceptor Squadron in Jacksonville.

After successive assignments with the 125th Fighter Interceptor Group – later designated the 125th Fighter Wing – and other high-profile commands, he was selected to follow Maj. Gen. Douglas Burnett as the Adjutant General of Florida in 2010.