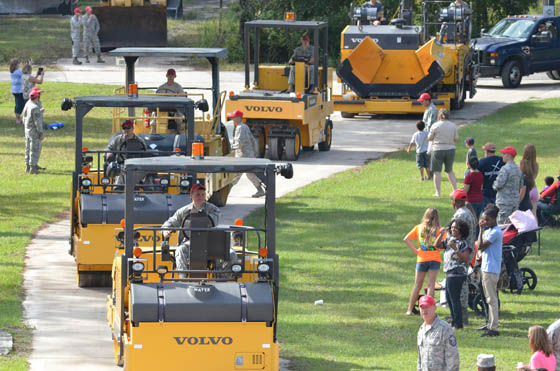 STARKE, Fla. (Oct. 5, 2014) – The Florida Air National Guard’s premier heavy engineering unit held what might have been one of the largest “shortest” parades in Camp Blanding history, as part of its family day Oct. 4.

Airmen from 202nd RED HORSE Squadron formed a parade of more than 65 pieces of construction and maintenance equipment – from bulldozers to lawn mowers – that snaked less than three-quarters of a mile through the unit’s compound during the morning event. Unit members and their families lined the short parade route as 202nd RED HORSE Squadron Commander Col. Robert Niesen and Airmen tossed handfuls of candy to waving children. 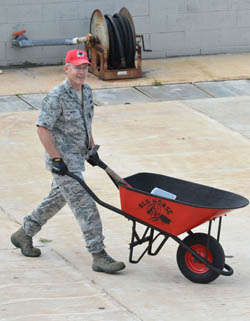 Appropriately the military parade was led by two horses from nearby Seamark Ranch – a youth organization from Clay County. Niesen, who followed behind with a stylized RED HORSE wheelbarrow, said the parade was a great chance for the unit members to get together, have fun, and let their families see the equipment and Airmen in action.

He added that the morale-building event was especially important since about half of the people in the 202nd – including himself – are relatively new.

“We are in a rebuilding time now, so have a lot of new people,” he explained. “In addition to that we really haven’t had time to get the families out here, and step back and appreciate what we have done.”

Since 2001 members of the unit have deployed to assist with construction projects in areas around the globe, to include: Afghanistan; Qatar; Doha; Kuwait; Iraq; and the Horn of Africa.