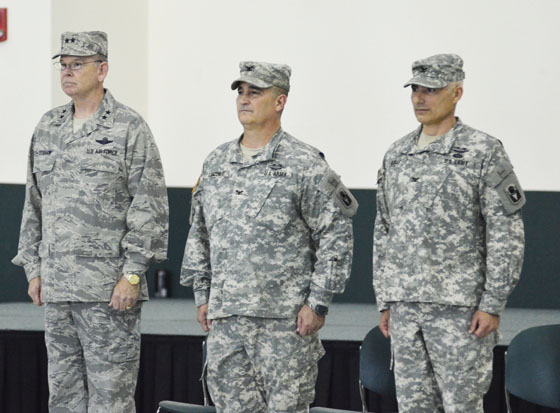 Ribas, who most recently served as the deputy commander of the IBCT, replaced Col. Mike Canzoneri as the unit commander of more than 3,000 Florida Army National Guard Soldiers. 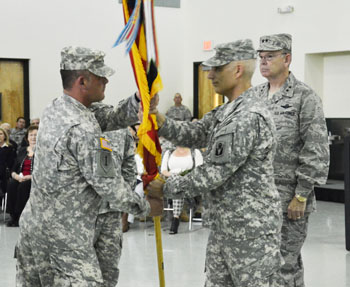 Canzoneri has worked with Ribas for more than two decades, and said he felt his former deputy would continue to lead the men and women of the 53rd in the right direction.

“He will do an outstanding job, and there are outstanding staff officers and people to support him. The future looks good for the 53rd,” Canzoneri said.

Turning to the formation of 53rd Soldiers gathered in the drill hall of the unit headquarters, Canzoneri thanked them for their hard work and support during his command: “You are the reason for the success of the Florida National Guard, our state and our nation.”

Adjutant General of Florida Maj. Gen. Emmett Titshaw praised Canzoneri for his leadership, and presented him with the Meritorious Service Medal during the ceremony.

“Throughout (his command) Mike’s leadership was ‘key’ to ensuring mission success and safety for the Soldiers of the 53rd,” Titshaw said.

Incoming 53rd commander Ribas was commissioned through the University of Miami Reserve Officer Training Corps program in 1987, and has served in several leadership assignments within the Florida Army National Guard. In 2007 he assumed command of the Orlando-based 2nd Battalion, 124th Infantry Regiment, and deployed with the unit to Southwest Asia in support of Operation Iraqi Freedom.

He is a traditional Guardsman with full-time employment at United States SOUTHERN Command, and is a resident of Pembroke Pines, Fla.

“I’m really excited about this opportunity,” Ribas explained. “I’ve been in this brigade for a long time, and I’ve seen a lot of really good leaders assume command and work within the brigade.”

Ribas assured the Adjutant General that under his watch the 53rd IBCT would continue the successes and tradition of professionalism that the former commanders have upheld.

“The 53rd has long history of doing things for the citizens of Florida,” Ribas said. “Everyone looks to us to continue that great tradition. And we will.”

Ribas serves as the 18th commander of the 53rd IBCT.