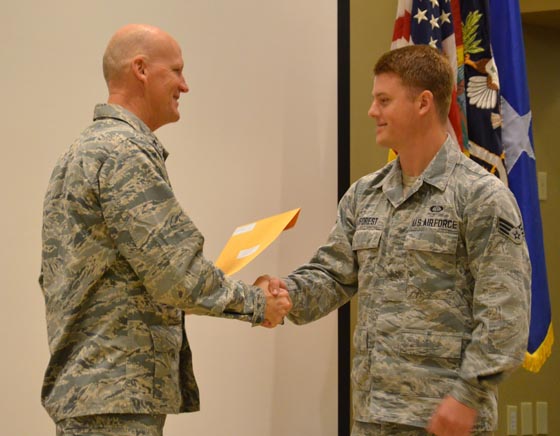 STARKE, Fla. (Sept. 27, 2014) – A multi-service course that successfully taught nearly 1,000 Air Force weather specialists how to work effectively with Army Soldiers in combat, ended Saturday with the graduation of its final class in Florida.

Sixteen Airmen graduated from the final class of the Battlefield Weather Initial Qualification Training (BWIQT) Course during a ceremony at Camp Blanding Joint Training Center. The “Battlefield Weather” class – which since 2009 has been a combined effort of Headquarters Air Combat Command, the Florida National Guard’s Regional Training Institute, and the 131st Weather Flight – will be moving to Ft. Huachuca, Ariz.

Since 2009 Army National Guard instructors from the RTI helped train 986 Battlefield Weather Airmen during 56 classes. The dynamic Army-focused instruction included everything from Basic Rifle Marksmanship and Combatives, to land navigation and small unit tactics. These Army-type skills were not historically taught to Air Force weather personnel supporting Army operations, but the BWIQT at Camp Blanding filled that training gap.

“I truly believe the skills that they learned here can and probably did save lives overseas,” Lefevre said. “This is what a partnership between two services is all about. We saw a need, stepped up to fulfill that need, and now we conclude this partnership in a grand way. This was a model for inter-service relationships.”

BWIQT graduate Staff Sgt. Casey Fletcher, of the 97th Operations Support Squadron stationed at Altus Air Force Base, Okla., agreed that the Army-focused training he received during the class would help him be more successful as a “Battlefield Weather” Airman. He called the course “engaging, demanding, pertinent and relevant” after crossing the graduation stage on Sept. 27.

“This was by far the best training I’ve ever had in the Air Force,” Fletcher said. “I really feel a lot more prepared than I ever would have been had I not come to this course.”

“This is the end of a long and successful association between the Florida National Guard and Air Combat Command in trying to make sure that our weather Airmen are the most capable, competent warriors that can accompany our tremendously professional and experienced Army forces in theater,” Eifert said.

The general and Air Combat Command’s Col. David Gaedecke – who both spoke to the graduates during the ceremony – lauded the Army National Guard instructors who helped make the class as realistic and successful as possible. They pointed to the course as a marker for more joint and collaborative future among the U.S. military services.

“This really is a testament to why our nation’s military is so incredible,” Gaedecki said.